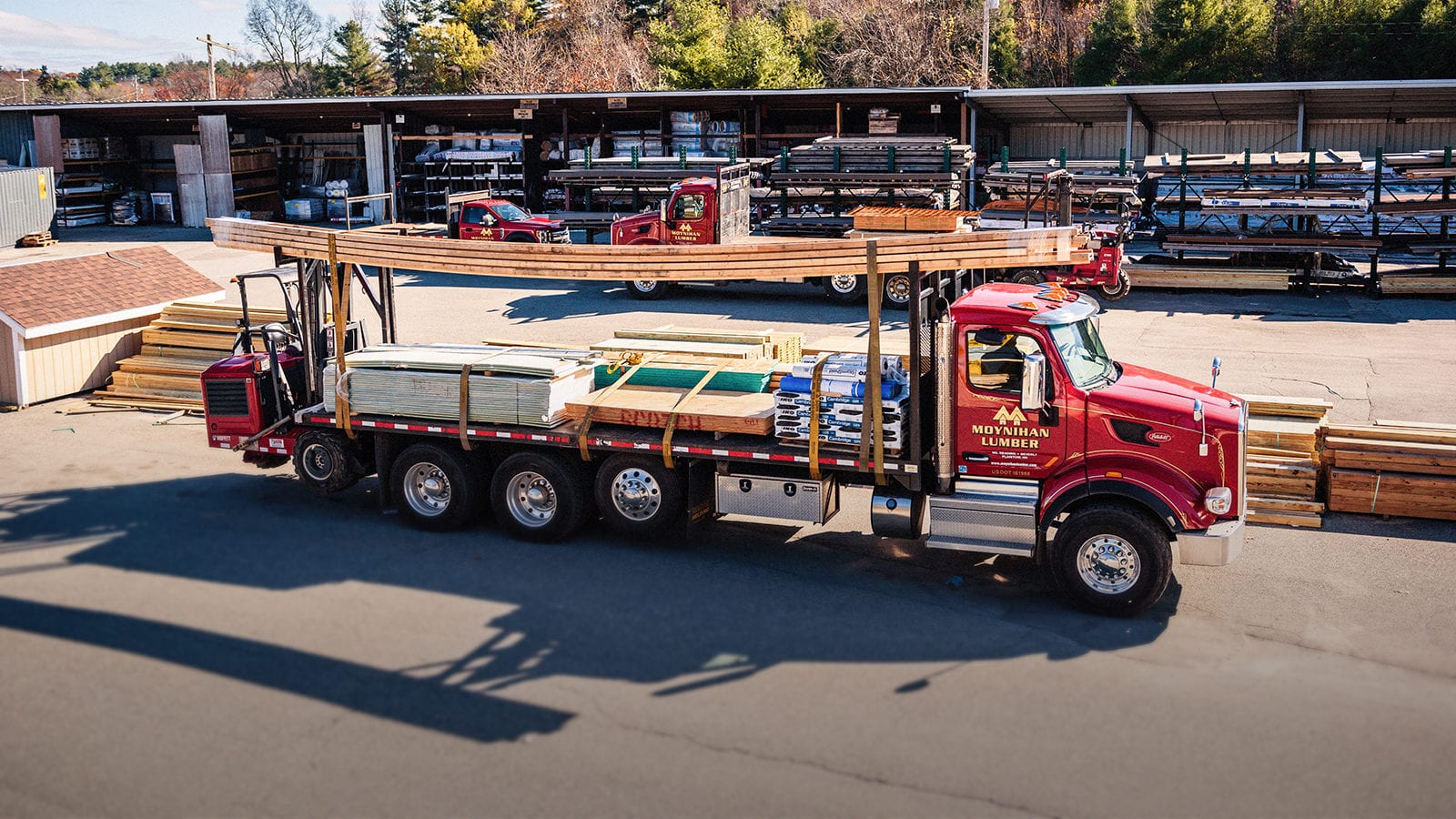 The Moynihan name has been linked to the lumber industry in Greater Boston for more than 100 years, since the current owners’ uncle, Arthur Moynihan, began working at a lumberyard near his home on the Saugus-Revere line in 1918. Arthur worked there full-time following his graduation from Boston University in 1923 until deciding to start his own company with a partner in Revere in 1928.

Arthur’s younger brother, John, was also attracted to the lumber business and, after graduating from Bentley in 1927, opened his own company in Cambridge in 1930 with a partner, in later years moving the company to Watertown.

Arthur and John purchased a door and window company in then-rural North Reading and opened Moynihan Lumber on October 1, 1959.

From the beginning, the Moynihan family has lived the company motto, “Quality Backed by a Desire to Please.” The Moynihans would offer quality products at competitive prices with an unyielding commitment to customer service. That has been a constant since day one. The company’s products are those of a traditional lumberyard: lumber and building materials, doors and windows, roofing and siding, custom millwork, and hardware.

Moynihan Lumber ownership now consists of Arthur and John’s nephews, Michael, Jack and Gerard Moynihan, all three of whom graduated from Saugus High School and the College of the Holy Cross in Worcester. Michael began working at his uncle’s lumberyard in Watertown in the late ’50s and went to North Reading as manager in 1959. When Moynihan Lumber was formed, Gerard was a senior in high school and Jack an eighth-grader. Jack would join the family business in 1970 and Gerard in 1974.

The early years of Moynihan Lumber coincided with a period of tremendous growth in the ’70s, as North Reading and surrounding communities benefited from a significant population shift to suburbia. In 1982, the company opened its first door and window showroom and a complete hardware and paint store, while increasing its footprint with more space cleared for lumber and building materials and a separate building dedicated to doors, windows, and other millwork items.

In the early ’80s, the company was still growing and the brothers recognized the need to expand. In 1986, they purchased Knight Lumber at the corner of Bridge and River streets in downtown Beverly, a location that offered proximity to job sites throughout the North Shore and easy access to routes 128 and 95.

Ten years later, the Moynihans expanded to southern New Hampshire, opening a third location on Old Road in Plaistow, just over the Massachusetts border and easily accessible from Route 495.

Moynihan Lumber has expanded its services throughout its history, responding to the needs of its customers. After the turn of the century, the company realized the need to become involved in kitchen cabinets. In 2005, a showroom was added to the Beverly site, allowing for 25 different kitchen displays, and all three locations now include kitchen cabinet displays.

The Moynihans take great pride in their employees, many of whom have been with the company for more than 25 years and one for more than 50 years. The brothers have long realized that their loyal employees have allowed the company to endure and thrive. “Our biggest asset is our people,” Michael said. “We have employees for a lifetime. We are a family business; not just our family, but we employ families. People stay because they know we care.”

The Moynihans have been actively involved in the communities in which they work and where they live, Michael in Reading, Jack in Lynnfield and Gerard in North Reading. Over the years the company has sponsored numerous sports teams, community projects and other school programs.

The Moynihans have also been involved in numerous activities within the lumber industry in Greater Boston and beyond. In 2016, they were awarded the Lifetime Achievement Award by the Massachusetts Retail Lumber Dealers Association for their accomplishments in the industry and in their communities.

The brothers have a strong work that was formed at an early age, as they shared a paper route in their Saugus neighborhood for 13 years. “That was our first lesson in customer service,” Jack said. “The experience was invaluable in teaching us responsibility and accountability on a daily basis.”

Gerard recalls being given some invaluable advice by his uncle, Arthur, on his first day in the business. “He told me, ‘Just treat people like you want to be treated and you’ll never have to worry about a job.’ I have thought of that advice often through the years,” Gerard said. “He was absolutely correct.”

The growth of the company over the years can be attributed to the hundreds of customers – large and small – who have made Moynihan Lumber their primary source of lumber and building materials. “We are truly fortunate to have so many wonderful repeat customers who know all of our people and shop our stores regularly,” Jack said.

Two generations of Moynihans have contributed to the establishment and growth of the company and now a third, Michael’s son and daughter, Michael and Katie, and Jack’s son, Chris, are on board.

The Moynihan Lumber advertising jingle – “We measure up” – accurately describes what the Moynihans have been doing for 60 years and, as long as work ethic, commitment and dedication count for something, they will be doing it for years to come.